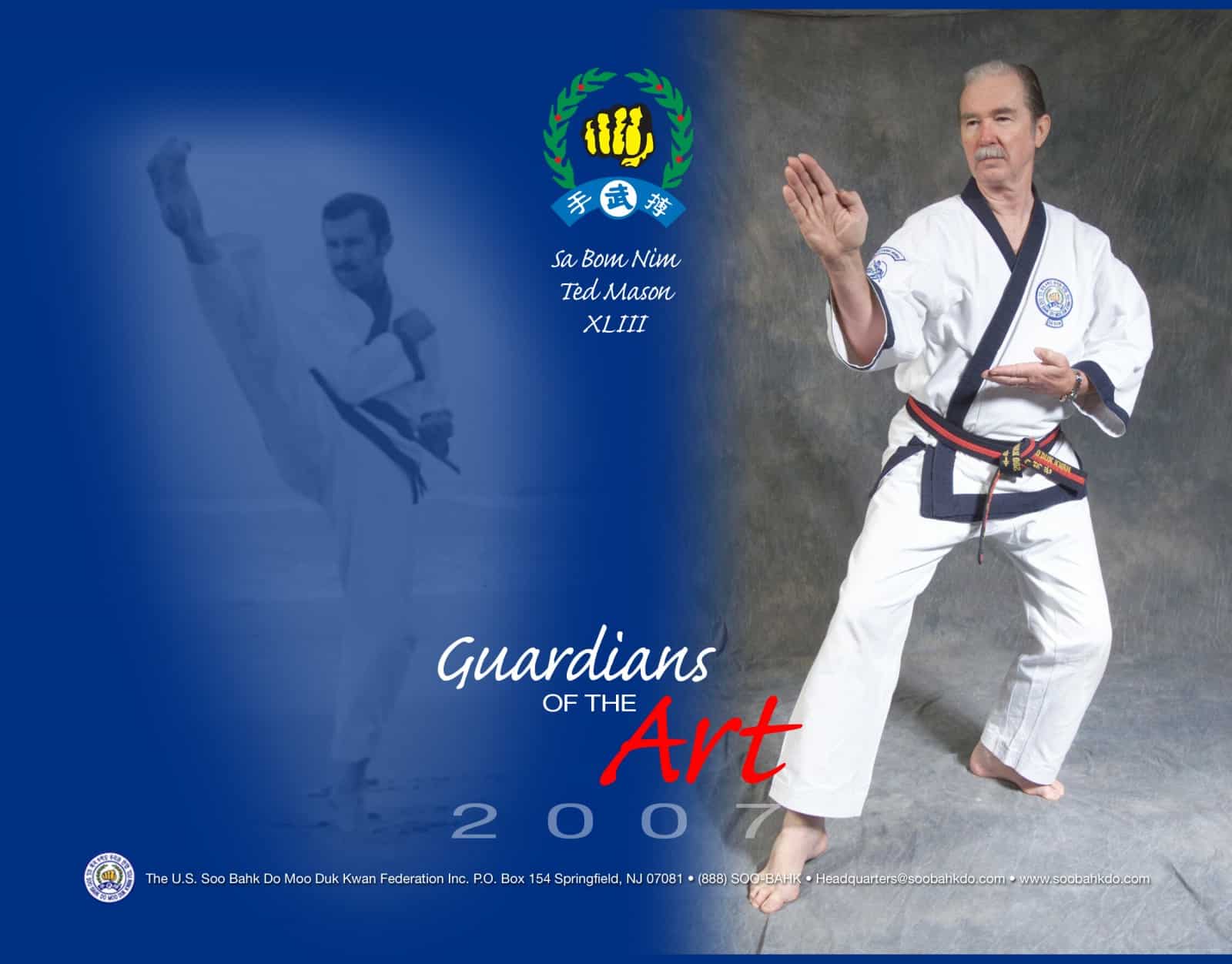 A few American Servicemen began teaching Hwang Kee's martial art system after returning to the U.S. during the 1960's. There were also many Korean instructors certified by Kwan Jang Nim who began teaching in the United States during this period. Kwan Jang Nim believed that the Moo Duk Kwan needed an organization in the United States and asked for a meeting with all Dan Members. This meeting was held on November 29, 1974 in Burlington, New Jersey where a "Task Force" was elected for the purpose of developing a charter.

The Task Force Members were:

After much hard work and many meetings, a Charter was written for the newly formed United  States Tang Soo Do Moo Duk Kwan Federation®. Election procedures were developed and nominations to the first Board of Directors were obtained from all across the U. S. Ballots were sent out to all known Dan Members in the U. S. Kwan Jang Nim counted the returned ballots and a charter convention was scheduled.

Officers of the first Board of Directors, of the U.S. Tang Soo Do Moo Duk Kwan Federation® were:

Other members of the board were:

The charter convention was held on June 28, 1975 at the Hilton Inn in New York. The Charter was ratified making this event the official birth of the Federation.

The United States Tang Soo Do Moo Duk Kwan Federation® continued to grow since its inception. Meetings of the Board of Directors were held annually since 1975 with some additional meetings held when needed.

The United States Tang Soo Do Moo Duk Kwan Federation® was originally comprised of nine regions. The states were assigned to the following regions:

Because of requests from members in the Northwest, there was a restructuring of regions on October 31, 1991 adding Region #10. The following changes were made:

The first International Championships were held in England on October 22, 1978. Black boards were first utilized for score keeping during the sparring competition on October 13, 1989 in Anaheim, California and Safety Equipment for the head and hands was first utilized on October 5, 1990 at the Concord Hotel in New York.

Dan Testing and Clinics were conducted after 1975 and twice a year in each Region after 1978. All Dan testing and promotion was to be carried out under the supervision of the Technical Advisory Committee headed by Grandmaster Hwang Kee's designee, Sa Bom Nim H. C. Hwang. (2)

Kwan Jang Nim visited each Region during April, May and June of 1981 and Supervised Dan testing and clinics. Testing for Sa Dan and above was conducted at Regional Dan Testing until December 4, 1983 when it was extended to a week of testing and held at Headquarters in Springfield New Jersey. Since that time, a week long "Kodan Ja Shimsa" has been held every year. The number of candidates has grown from the four that tested at the first "Kodanja Shimsa Week" to 44 Candidates in 1998.

At a meeting of the B.O.D. on October 15, 1988 a long range planning committee was formed. This later became known as "Mission 2000 - Long Range Planning Committee". In order to re-define the mission and goals of the organization and assess its future, it was decided that Kwan Jang Nim should be consulted. A meeting with Kwan Jang Nim Hwang Kee and the committee was held at Headquarters on January 28, 1989. This meeting resulted in the "Mission 2000 objectives" which are:

In 1991 The Kwan Jang Nim appointed 7 senior members to a 3 year term on the Technical Advisory Committee (T.A.C.):

They were to assist its Chairman, H. C. Hwang Sa Bom Nim.

"Chairman of T.A.C., Sa Bom Nim H. C. Hwang, under the direction of Kwan Jang Nim has appointed a Regional Examiner for each of the 10 Regions in the United States. These Ko Dan Ja will provide additional opportunites for our members to train with senior Ko Dan Ja and to enhance their Moo Do skills. The regional examiners will also represent the Technical Advisory Committee by overseeing Regional Dan testing, clinics, tournaments, studio membership and Kyo Sa applications.

After several preliminary board meetings and discussions, the Federation officially changed its name to the U. S. Soo Bahk Do Moo Duk Kwan Federation® on September 10, 1994.

Celebration of the 50th Anniversary of the Moo Duk Kwan® was held in Seoul Korea on September 23, 1995.

In 1999, the Kwan Jang Nim reorganized the T.A.C. into three departments with H. C. Hwang as Chairman:

The Senior Advisory Committee (S.A.C.) was created with the following members:

On July 30, 2005 Kwan Jang Nim reorganized the TAC and created the Hu Kyun In, Senior Members given the task of "Looking After" the continued growth and development of the art and the U.S. Federation as a Moo Do organization.