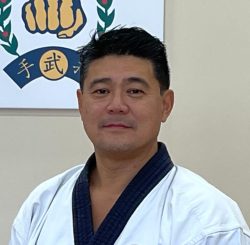 He began his Moo Duk Kwan training in 1981 in New York State. He earned his 1st dan in 1984 at the 73rd Dan Classing. He resumed his training in 2010 and earned his 4th dan master rank in 2017 at the 140th Dan Classing. One year later in 2018, he earned is Sa Bom certification. For the last twelve years, Kim Sa Bom Nim as been an active member of our federation participating in international, national, regional and local events.

Professionally, Kim Sa Bom Nim has worked in the financial services/banking industry for over 25 years in New York City. He brings a wealth of experience as a board member in other organizations as well. Most recently, he served 6-years as a board member of a private independent elementary school in Manhattan and Chaired the Development Committee raising over to $500K annually for their Annual Fund and Capital Campaigns, as well as, serving several other committees on the board. He has also served as a director on the board of a Seattle based private corporation for over 20 years.

Kim Sa Bom Nim was elected as director in region 2 in 2021 and fulfilled the role of Treasurer in his first year. Most recently, he was elected as Chairman of the Board on February 28, 2022. The Moo Duk Kwan has influenced his life as a young child and continues to ignite his passions. As Chairman of the Board, he expresses his desire to strengthen the legacy of the US SBDMDK Federation for our future generations.

He lives with his wife, 2 children (both dan members) and currently resides in Manhattan.

Are You a Silver Moo Do In?

Click To Receive Updates About Silver Moo Do In [...]

Since 2000 the Moo Duk Kwan® has hosted A Moment With The Masters experience for members of all rank[...]
Scroll To Top
We use cookies to ensure that we give you the best experience on our website. If you continue to use this site we will assume that you are happy with it.AcceptPrivacy Policy